“If I tell you that this phone is made in China, what is your first thoughts?”, David, worked in Teule Kenya, an NGO organization working on education, smiled and asked a question in reply when we asked him whether Africans don’t trust China-made products.

“Branding and public perception are the key challenges for Chinese solar companies to enter Africa,” said Ren Hang, founder of Jua Energy, a Chinese solar company who wants to have long term sustainable development in Africa. Ren and his co-founder started with a very simple notion:”China has the best solar technology and the cheapest manufacturing cost, why the world’s solar industry is so much dominated by the west?”

Today, China has world-class solar technology. According to The Washington Post, firms like Suntech, Trina, and Yingli have captured 80 percent of the global solar-manufacturing market. However, because of over-supply in the domestic market, in 2013, the main Chinese subsidiary of Suntech, the world’s largest solar manufacturer, was forced into bankruptcy court.[1] Facing such challenges, many Chinese solar companies began to seek for alternative market.

Africa is the ultimate choice. Data by the International Energy Agency’s World Energy Outlook 2014 shows there are 622 million people on the continent without electricity, which is close to half of Africa’s population. While the urban areas have a 68% electrification rate, the numbers for rural parts are just 26%.According to the Kenya Ministry of Energy, the demand for electricity generated from home-based PV systems is projected to reach 22 GWh annually in 2020, representing a growth rate of 20000 solar home units annually. Chinese companies think Africa is their new continent to develop. However, this “into Africa” trip for Chinese solar companies is not an easy journey.

Started in 2012, Jua Energy is now a Nairobi-based Chinese company who designs and manufactures solar home system.In the interview with Ren, he believed that within the solar home system markets in Africa, 70% of market are occupied by products that compete by extremely low price, and in the 30% rest, some western companies like d.light dominate with their branding. As many Chinese solar products that flood into Africa are very cheap and with not satisfying quality, it is now difficult to convince consumers Chinese products could also be very good and worth premium price. Despite its difficulties, Ren hoped that his company can be differentiated from other Chinese companies who come to Africa for speculation, and build a reputable and reliable branding like some western companies did. To compete against the cheap products, Ren wants to build the brand; to beat the western big names, he wants to win by making similar products cheaper based on the fact that China is world factory for solar products. However, how to penetrate into the local rural market, and how to win people’s trust for his relatively expensive Chinese solar products, Ren is still having many questions unsolved.

Though Ren thought that branding issues and relatively high price are the obstacles for them, there may be more challenges ahead. Lack of in-depth knowledge in the rural areas is a common cause of Chinese companies’s insufficient estimates of market. Though Ren, and many other Chinese businessmen believe rural communities in Africa could not afford good products, when interviewing a few Masai villages in Kenya, we found that for very similar solar home systems, M-KOPA, a Kenyan solar company, sells 21,000 shilling, which is almost three times the price of Jua Energy’s.

M-KOPA Solar, headquartered in Nairobi, Kenya, issolar company that works closely with Safaricom, one of the biggest local telecom companies. The success of M-KOPA stems from making solar products affordable to low-income households on a pay-per-use installment plan. Customers acquire solar systems for a small deposit and then purchase daily usage “credits” for 50 shilling. After one year of payments customers own their solar systems outright and can upgrade to more power.All revenues are collected in real-time via mobile money systems and embedded GSM sensors in each solar system that allow M-KOPA to monitor real time performance and regulate usage based upon payments. 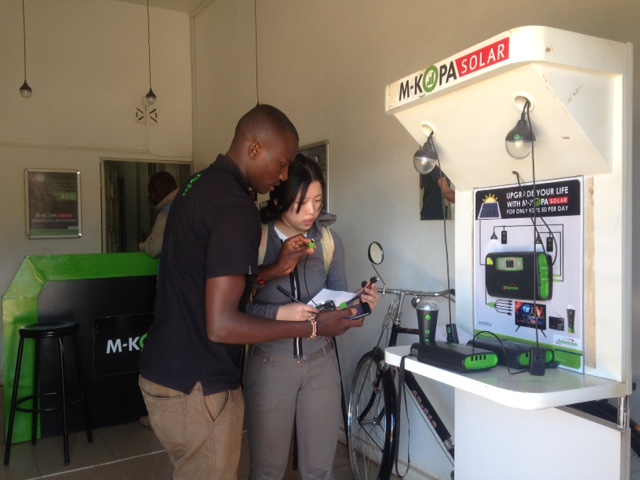 M-KOPA designs such payment system based on their deep understanding of locals’ consumption behavior. The locals, such as the Masais, gain income from the selling of their livestock and handicrafts. After they gain the money, they will likely spend it immediately instead of saving it for further uses. In many rural areas, villagers do not have enough savings to do a one-time payment for their purchase mainly because of their poor consciousness of savings — even though it is much cheaper if they could pay by cash instead of by installment.

Without strong local network like M-KOPA’s, Chinese businessmen like Ren could not easily adopt this kind of payment method even if he wants to.

Is that true that if you could not do PAYG (pay-as-you-go model), you could not win in the market? The answer is no. “We control our quality.” said Peter Njeru, a training manager in d.light, a very reputable western solar company. Although d.light doesn’t adopt PAYG system, their simpler and cheaper products, such as solar lights, solar mobile phone charger kit, have considerable sales volume in rural Africa. Peter told us that d.light is a global social enterprise aiming to improve the lives of the two billion people in the rural Africa that live without access to reliable energy. Because of the practice of their beliefs, they won many international awards and established a deeply cooperative relationship with international NGOs that have the same beliefs. And through a global NGO network, they learn about what rural communities need and build trust among the communities about their branding and quality.

NGOs have deep roots and networks in rural areas of Africa.If foreign companies don’t have their local network, they  may consider cooperate with NGOs in order to enter rural markets. In January 2016, AMREF (African medical and Research Foundation) and Samsung have launched a project in Busia County that will see the establishment and installation of a Digital Health Village – a solution that will use solar power to improve the lives of the county’s residents.AMREF established electronic medical center in Busia County, western Kenya, while and Samsung provided free solar panels. “That Samsung corporates with us through Corporation Social Responsibility(CSR) also helps them build branding in such market. When we have money to purchase the equipment, we prefer to cooperate with a familiar company.”said Martin,the manager of project AMREF. He told us that CSR and the programs that pay attention to social benefits may be the breakthrough points to the cooperation between company and NGOs. Martin also mentioned that the product, even if the price is not the lowest, if people believe in its quality, will be welcomed by consumers.

Jua Energy does consider cooperating with NGOs, but Ren is concerned that NGOs are dominated by Western Countries and it is difficult for them to enter this circle. Even if they want to break through, they don’t know how to persuade NGOs to try their Chinese solar products, which is still a common challenge for the Chinese entrepreneurs who are not familiar with international NGO. “NGO wants to help people in needs, but companies want and need to pursue maximum profits.” Ren said.

“The market is not limited. The sun is there.” said David, a staff in AMREF Kenya. It is evident that Africa has potential solar market. However, for Chinese solar company, they still have many things to learn to enter rural Africa.

Chen Jiayi is from Shenzhen, China, and currently goes to school in Boston, MA. In Winter 2015-2016, she joined the China Africa Seed Scholar Project, a China House program. During her time in Kenya, she conducted research on how Chinese solar companies enter rural Africa. As a Chinese national, she is always eager to understand development and business interactions between China and Kenya. By visiting local non-profit organization and interacting with local people, Chen feels she gained new insights into solar markets in rural areas of Kenya and the unlimited prospects of Chinese solar products in Africa. Currently, she is applying for colleges in the USA, and doing research on graph theory and network security.

This post first appeared on The China-Africa Project on January 12, 2016.