This post originally appeared on from Africa to China, an awesome site put together by four African ladies studying in China. According to their mission, from Africa to China is “on a quest to revamp the landscape of Africa by dissolving existing stereotypes and using our knowledge and experiences to add value and contribute to the bigger strategic thinking plan for the growth of Africa.”  Be sure to check them out!

Once everyone was seated, Ms Tebogo Lefifi took to the podium. “Until the lion tells his own story, the history of the hunt will always glorify the hunter,” she began. The invocation of this well-known African proverb was incredibly fitting. It reflected the importance of honest and balanced reporting by journalists who cover South Africa-China relations, as well as the need for South Africans and Africans to be at the forefront of reporting on how South Africa interacts with China. The guests in attendance spanned a wide range of different publications, most of them from China. The Beijing Review and China Business News were among the many media publications that had reporters and staff at the Media Appreciation that afternoon.

In her address, Her Excellency Ambassador Dolana Msimang began by emphasising how the relationship between South Africa and the Chinese media is a “two-way street”. She was specifically referring to the mutual reliance between the two parties, with the South African Embassy and Brand South Africa providing access to content for the purpose of balanced and accurate reporting, and media practitioners  using this content to write stories and disseminate information. HE Ambassador Msimang made it clear that the South African Embassy in Beijing remained open to cultivating a strong relationship with the media and that its doors were “always open”.

In order to bolster the ability of the reporters in attendance to write thoroughly on the event, HE Ambassador Msimang provided a concise overview of both the state of affairs in South Africa and the state of South Africa’s relations with China. She also made sure to mention why, for many reasons, 2016 is an auspicious year for South Africa. For example, this year marks the 20th anniversary of the signing into law of the South African constitution. It is also the 20th anniversary of the Truth and Reconciliation Commission (TRC) and the 40th anniversary of the June 16 Soweto Youth Uprising in 1976. 2016 also marks the 60-year commemoration of the 1956 Women’s March to the Union Buildings in Pretoria during Apartheid. The Ambassador’s highlighting of these historical landmarks for South Africa underpinned the spirit in which South Africa week was launched that afternoon.

With the vision of the South African embassy in Beijing being the creation of sustainable development and inclusive growth, HE Ambassador Msimang spoke about South Africa’s membership in the G20 and its status as the only African country that is part of the group. She also highlighted the role South Africa played in driving the development agenda at the 2016 G20 Summit in Hangzhou alongside the Summit’s host, China.

“The purpose of this event was to thank you, our dear friends from the media for your constant positive coverage of South Africa” continued Ambassador Msimang as she came to the end of her address. Echoing the sentiments of Jacob Zuma at the South Africa-France Business Forum the Ambassador emphasised that South Africa is “open for Business” and that the embassy will remain committed to showcasing how South Africa is expanding its presence in China. The formal proceedings of the Media Appreciation were followed by a foray into the Embassy’s garden, where guests watched a vibrant performance before mingling and networking over fine finger foods, South African wines, and glasses of Amarula poured over ice. 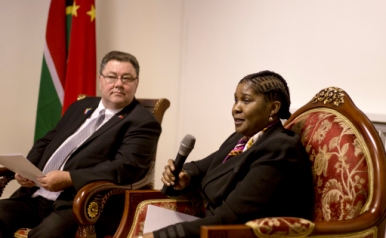 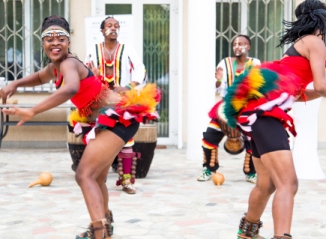 I found it both interesting and exciting that the first event of the inaugural South Africa Week in Beijing would specifically commemorate the role of the media in South Africa- China relations. Beyond the instrumental role of providing coverage and directing the narrative of South Africa-China relations, the media were commended for contributing to South-Africa’s favourable positioning in China.

From Africa to China is a considerably young project, but as a co-founder of this platform, I felt strongly about how important it was for young Africans to be part of the media contingent at the event. I was, and still and am, incredibly impressed by the effort that has been made by the South African Embassy and Brand South Africa to boldly showcase South Africa both culturally and as a political and economic partner to China. The Media Appreciation was a great opportunity for media practitioners who report on South Africa for a Chinese audience to connect, converse and share information. The event came to a close and the evening drew in as guests reluctantly left the South African Embassy with pockets and purses full of new business cards, notebooks lined with quotes for their stories, and a taste of South Africa on their tongues. 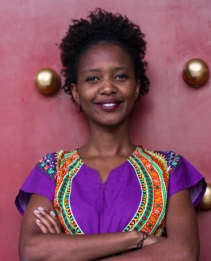 Wadeisor Rukato is a Zimbabwean who has lived in South Africa for the past 19 years. She graduated from the University of Cape Town with a Bachelor’s Degree (Honours) in International Relations and wrote her Honour’s thesis on the effects of migration on development in Zimbabwe. Wadeisor aspires to work at the intersection of consulting and journalism on Africa in the future.