Why are white people doing this job? Why do westerns always do advocates?’, says Reza, leader of APE Defender of COP, with his eyes glittering, ‘Why do we Indonesians, we yellow race, rarely take part in protecting Orangutans, Sapiens of our forests?’ His words indeed impressed me and made me ponder.

Decades ago, Kalimantan Island had a forest coverage rate of eighty percent. However, in the middle of the 1980s, forest area in Kalimantan extensively decreased twenty-five percent and it kept the annual decreasing area of 1.3 billion hectares. This means orangutans’ living habitat was disappearing at the same speed and most of the destroyed area had been used for planting palm trees. Because of covering of palm oil field, orangutans lose their major resource of food. Sometimes they are so hungry that they come into palm tree forests and eat small palm trees, their only food coming. As a result, palm oil companies called orangutans as ‘pests’ and found excuses to brutally kill them. Till 2016, the number of orangutans has decreased around sixty percent. Under this situation, Hardi, once a member of BOSF (Borneo Orangutan Survive Foundation), set up COP (Center of Orangutan Protection) to fight directly with palm tree oil companies and save orangutans. Despise the risk of being arrested, COP members enter palm oil field to collect evidences of orangutans being killed. In this way, those palm oil companies will have no chance to sell their palm oil because they cannot get permits from RSPO (Roundtable of Sustainable Palm Oil). Also, COP members visit schools, organize exhibitions, and hold concerts to attract more people to pay attention to orangutans. Their advocates are an essential part of orangutan protection.

As a member of the first Chinese volunteer groups to visit COP Boneo in August 2017, we stayed there for a week. We studied orangutans’ situation, made activity space for baby orangutans, prepared food for orangutans in island, and observed orangutans’ daily.

What did we learn from COP Boneo?

I learned about a lot of knowledge of orangutans and COP’s work, even some details that I cannot get from Internet. With deeper comprehensions, numerous thoughts are triggered.

‘If we do not do this, then who will?’ Reza briskly said. His words were like slight wind, soon ended, but echoed in my brain for a long time. During the seven days we spent with COP members, I saw their love and devotion to orangutans. They are fighters who bravely fight with people who are hurting orangutans; they are families who carefully pay attention to lonely baby orangutans; they are helpers who selflessly help orangutans recover from disasters they experienced. They refuse to accept funds from palm oil companies even though sometimes they face financial problems: one time they had no money for salary. But even in this situation, COP members still took care of every rescued orangutan. These kind characteristics are that I have never seen before from any NGO.

Reza showed us many pictures of orangutans, some of them been well looked after by COP and some of them been badly hurt by workers of palm oil companies. I remember the photo of head of a dead male orangutan most impressively. His eyes closed tightly and his face became less reddish. No-name killer put his head on soil. No forest and vegetation surrounded him. There was only a layer of dirt on his big, alpha face. I could not stop myself from thinking of his majestic appearance when he was alive. I could not stop imaging the moment of his death. Before his eyes are closed forever, did they reflect hate towards humans, sadness for ending of life, or pray for maybe escape? He would have no chance to tell. And we are never going to know about it.

I cannot help myself think about the relationship between human and nature, justice and profits. As we know, COP is the only NGO which has no economical connections with palm tree oil companies, even though they will offer a huge amount of money. ‘All of us, we do this job because we love orangutans. Money is not really that important to us. One thing we valued is orangutans’ safety and happiness.’ That is what Reza told us. And that is what part of COP is unique and heart-warming. Unfortunately, only by hard-working NGO members’ efforts to save orangutans is not enough. Those palm oil companies only have their profits in mind and neglect wildlife, especially orangutans. They are selfish and cold. But one day, when last forest is destroyed by palm oil company, how many orangutans have died? What appearance our earth will be? And how much money they are able to make in the future? Answers are definitely negative. 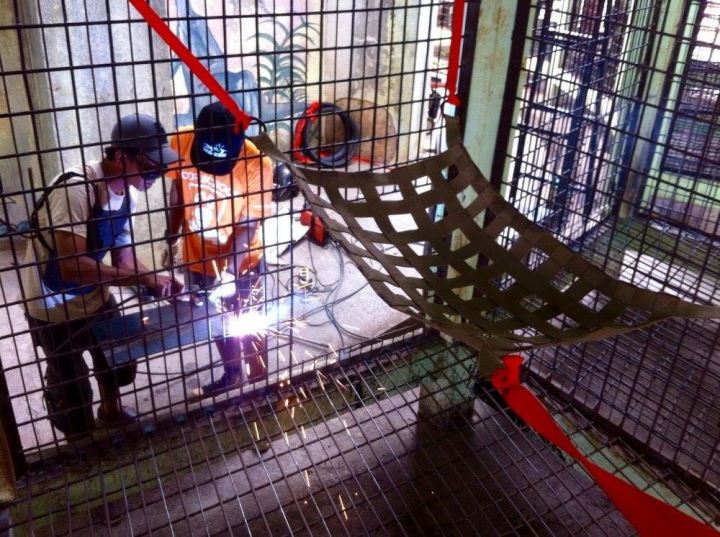 Can Chinese also join this fight?

Nowadays, orangutans are not known by many Chinese people. Opposite to popularity of orangutans in China, palm oil is widely used in China. In the past five months, Indonesian total palm oil production is 151,100,000 tons. Compare to last year, 2016, this production increased thirty-five percent. During those years, Indonesia product more and more palm oil. Also, as one of the biggest importing country, China is going to import around 5,600,000 tons of palm oil this year. This is about one third of Indonesian palm oil production in the first half year of 2017. And this number also increases every year. What’s more, China takes part in producing palm oil as well. In China, there are several international palm oil companies, such as Ju Long, Jin Guang, Jin Ying, and Ding Feng. In Indonesia, many Singapore and Malaysian palm oil companies’ major shareholders are ethnic Chinese. This means, China is not only the main consumer but also the primary provider of palm oil in the world and it is unconsciously influencing and damaging orangutans.

In China, we have pop stars, like Jackie Chan, broadcast about the importance of protecting wild animals and advocate people not to buy animal products. However, although they indeed call for guarding wildlife, such as tigers, sharks and so on, they pay little attention to orangutans. Before I became a member of this volunteer work, I had never heard of orangutans, so do people surround me. From the other hand, this may be a good thing because Chinese people can start from origin point to involving themselves into orangutan protection. According to former examples, public advocate is one of the most useful ways. Since Jackie Chan said, ‘No trade will bring no kill. Please do not buy any tiger products.’, the number of tiger products trade has begun to decrease. In the same way, the prospect of orangutan protection in China is very optimistic.

We, our group of six, plan to cooperate with COP members. Since orangutans are not well-known in China, we decide to use our videos which are made of resources we collected in Indonesia to advocate and hold a crowdfunding in Shanghai after we go back. The money we fund will be donated to COP to support their assistance of orangutans. Also, through our crowdfunding and speech, we wish the publicity of orangutans in China can be set up.

The following article was written by Zi Chen and Jiawei Yang.