“Nowadays, getting malaria is like getting the common cold,” explains Nancy, who has long suffered from the illness—a result, she suspects, of the unsanitary conditions of the community in western Nairobi where she makes home. When she was a teenager, Nancy recalls, the medicine used to treat the disease had strong side effects; the treatment itself was an additional illness. While she still is affected by malaria, things are a bit better, she explains. At least there are more treatment options.

One of those options is Artemisinin, a group of drugs that are used to treat malaria. Derived from an herb employed in Chinese tradition medicine (CTM), Artemisin was discovered by Chinese chemist, Tu Youyou, who received the Nobel Prize in 2015 for her work. The medicine epitomizes, perhaps, the contribution Chinese people may play in medicine on the African continent. Which led me to ask: what role is China playing in health in Kenya and beyond? How is it changing? 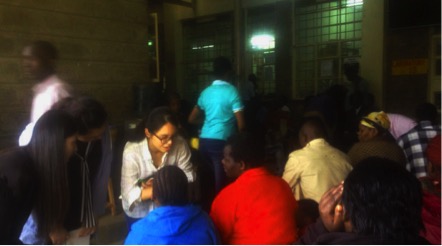 “Today the medical situation in Kenya is like what it was in China 20 years ago,” said Dr. Liu, who, already greying at the temples, talked to us genially at his clinic. The general practitioner first traveled to the East African nation as the member of a medical aid team. When his term finished he stayed on and set up a private practice, working out of several hospitals. Although the medical situation has improved recently, he observed, malaria, diarrheal diseases, typhoid, HIV and TB are still common in Kenya, particularly in some of the capital city’s sprawling slums.

“Most of these diseases are caused by an unsanitary environment, polluted water, mosquito bites and security food issues,” explained the principal of Scom Center Academy, an elementary school in Mathare, one of the biggest slums in Kenya. Because of the huge gap between rich and poor, public hospitals provide free or relatively cheap treatments, but the service can be perfunctory because of the constantly crowded environment. The private hospitals, on the contrary, provide better equipment and medicine, though at a higher price.

Early seeds of medical cooperation between China and Africa were planted in April 1964, when the Algerian government hosted a delegation from Beijing. As part of the agreements, the Chinese government subsequently sent medical teams to an African country for the first time. “It is because China’s assistance over the past 50 years has gained the trust of African countries, that we have laid a solid foundation of friendship,” said Wang Liji, former deputy director of the China’s National Health and Family Planning Commission.

The medical partnerships between China and Africa that began as aid are today transforming—and commercializing. China’s pharmaceutical industry has greatly developed over the past 20 years. The medical market in China now is increasingly saturated and Chinese companies are seeking opportunities to “go out”. Moreover, China’s middle and low-end medical equipment has relatively good quality that is increasingly able to meet the standard of developed countries. Compared with similar products in Europe and America, China’s medical products often have price advantages; their reputation in emerging market is as such gradually gaining strength.

Kenya, for example, is an important market in which a growing number of Chinese medical companies are striving to compete. However, Chinese companies still have a lot of struggling to do in order to integrate into the local environment. This is clearly demonstrated by the biggest market in Kenya: government procurements.

The Kenya Medical Supplies Agency (KEMSA) is a specialized government medical logistics provider, responsible for purchasing medical products from domestic and international suppliers and then sells to public hospitals in Kenya. Very few of these suppliers are Chinese. “There are only two Chinese suppliers in our recent database of government financed purchase,” said Mike, a procurement officer in KEMSA. Despite the fact that some Chinese manufacturers provide raw materials to many Western and Indian suppliers of KEMSA, very few Chinese companies have managed to penetrate this marketing channel by themselves.

A further complication results from that fact that other than KEMSA’s independent financing, the majority of funding in KEMSA is from international organizations like USAID and Global Fund. These purchases are regulated by international standards, which few Chinese medical companies explicitly comply, as of now.

“Even the big medical companies in China seldom manage to get on the qualified list of international organizations such as WHO,” said Lin, a Chinese medical agent who helped Chinese medical companies secure government tenders in Kenya. According to Lin, Chinese companies would very much like to get tenders from KEMSA, no matter the government-financed part or the international financed part, because those tenders could last a few years. However, doing so has provided difficult for Chinese companies.

Holley-Cotec was one of the first Chinese companies to enter Kenya. In 1993, Holley-Cotec Pharmaceuticals entered African markets by selling an Artemisinin-derived anti malaria drugs, “COTECXIN”—referred to by some on the continent as “Chinese magic medicine”. However, the promotion did not go smoothly in the beginning. Back in the 1990s, people in Africa were already accustomed to Quinine. It was not until 1998 when Chinese government sent experts medical groups and demonstrated the effectiveness of Cotecxin, that Africans began using the alternative Malaria treatment. “Today we sell Cotecxin in Kenya mostly in the private medical market,” said Lee, a senior staff at Holley-Cotec who previously worked at the subsidiary in Nairobi.

However, challenges for Holley-Cotec Pharmaceuticals still exist. Even today, due to a lack of purification technology, their product compound Artemisinin products are merely used as a raw material by other pharmaceutical giants, like Switzerland’s Novartis France’s Sanofi. According to Mike of KEMSA, Kenya’s antimalarial drug market continues to be dominated by Indian companies, with some Western companies occupying a small share.

“China has an absolute advantage as the source of artemisinin, but we are now merely cheap raw material supplier, supplementing the final medical market,” said Wang Licheng, president of the Holley Group, when Tu Youyou was awarded with Nobel Price. Like big companies such as Holley-Cotec, have their challenges entering the African markets, smaller private medical companies from China have found more challenges. TR Medical Instruments Co. Ltd. is the first medical consumable company in China to successfully produce Polyvinyl chloride tracheal tubes. Despite its influence back at home, it is a relatively small player in the international market. Chen is the general representative of TR, who was sent to Kenya alone in 2014 to try to open this market.

“Unlike Weigao Group who has Chinese government to help connect with Kenya government, we are here by ourselves, without any support or navigation,” said Chen, referring to another Chinese medical company who just entered Kenya as well but already got some tender with KEMSA. According to Chen, in the past two years they participated in over thirty tender biddings but only won two, both of which are very small and could not generate enough income.

Small Chinese medical companies like TR are putting more hope in the private medical market in Kenya, knowing they have hard time fighting for government tenders. However, again, that is not an easy market.

“We usually use Western big brand drugs, and when the patients cannot afford them, we would use Indian generic drugs,” said Lucy, who works at Aga Khan Hospital, one of the largest private hospitals in Kenya which accounts for almost half of the private medical market. According to Lucy, currently they do not have medicine or consumable from Chinese companies.

Lucy has met some Chinese medical companies at a medicine expo in Kenya, where she saw their cancer drugs. She told them such products have great potential, as domestic supply is not enough. However, this company never came back to follow up. “Maybe the Chinese companies have not explored this market and the channels well,” Lucy guesses.

Other than a few big private hospitals like Nairobi Hospital and Aga Khan Hospital, private distributors are the remaining segment for Chinese companies in the commercial market. However, few Chinese medical companies have made strides in this channel.

Phillips Healthcare Services Ltd (PHSL) is one of the biggest pharmaceutical distributors in Kenya, through which medical companies can register their drugs and have marketing service. “For this branch we focus on generic pharmaceuticals, which are almost all from Asia. We work with 17 Indian companies but only one Chinese company. They do not seem to reach out to us a lot,” said Dr. Bhudia, a pharmacist of PHSL.

“Considering Africa as a whole market, I think more Chinese pharmaceutical companies would pay more and more attention to the African medical market since it has 1.1 billion population,” expressed a fellow in Holley-Cotec Pharmaceuticals. However, he does see the challenges facing Chinese medical companies.

Today, Nancy, who is affected by malaria with unfortunate frequency, is still using antimalarial drugs mostly likely made in India. More and more Chinese medical companies of different varieties are entering African medical market. However, Chinese medical companies still have a long way to go before they make a substantial impact. If these firms are able to combine both reliable quality and price advantage, and learn how to adapt to local markets, they could thrive in Kenya and elsewhere on the continent. The future of Chinese healthcare on the continent may very well be driven by business rather than aid.

Wang Yujue is a former China House Summer Fellow.  Influenced by her parents (both doctors), Wang has developed a passion for deepening her knowledge of different countries’ medical situations. In July 2016, conducted a research about Kenya’s medical situation and Chinese medical companies’ operations in Kenya. Currently, Wang is a junior at Shanghai University, and is preparing to apply to graduate school.