“If they build the railway across Nairobi National Park, I will throw myself on the rails and die­,” a man, wearing a T-shirt with Don’t You Dare Destroy Our Park boldly printed across his chest told me, “I don’t want my children to ask me what I did at that time!” I met this man, a Kenyan, at a rally protesting the construction of a railroad through Nairobi National Park.

I was shocked to hear such an extreme statement. I kept nodding my head awkwardly, wanting to show my understanding for the situation. But really, I felt nervous and out of place. To complicate things even more, the railway will be constructed China Road and Bridge Cooperation (CRBC) and funded by China Exim Bank.

Still, I was drawn to the rally, even though the consequences could potentially be dire. On the Chinese side of things, it is not considered safe to show up at demonstration (even abroad), which may be regarded by Chinese government as an anti-China. On the Kenyan side, I was afraid that people would be mean, and possibly even aggressive towards me because I am Chinese, and they are protesting a Chinese-built railway. Plus, with the increasing Chinese presence in Kenya, there has been a measure of anti-Chinese sentiment, perceptions that Chinese always buy ivory, and that we don’t care about wildlife at all.

As International Studies student, Africans’ attitude towards Chinese people and understanding the image of Chinese overseas has always interested me deeply. Furthermore, being Chinese myself, demonstrations are mysterious, rebellious, dangerous—and exciting. When I was studying in Hong Kong, I heard many stories from different perspectives, about how people and students encountered conflicts with authority. I had never taken part in, or even witnessed, any sort of demonstration. I was curious what would happen Kenya, and how Kenyans show disagreement with the authority. I was curious about why people would participate in these protests, despite personal risk. This kind of thinking ran counter to everything I thought I knew: in China, most people avoid in these kinds of sensitive situations at all costs, because there are few (if any) causes that are worth sacrificing your personal safety for.

Since the beginning of September, two weeks before the official press briefing announced the route for the protest march, there had been a flurry of wildlife activism in Nairobi called Save Nairobi National Park. These demonstrations had begun earlier, as soon as some conservationists got the news that the railway is planned to cross the national park. These demonstrations have primarily been organized by conservationists and members of the local Maasai community.

The day before the demonstration I browsed the Facebook page for Save the National Park, trying to get more information about this activity. I reached out to a man named John (name changed for privacy), who posted lots of lively pictures of wildlife from Nairobi National Park. I sent him a message telling him that I am researcher from China and that I wanted to know more about the protests. John was incredibly welcoming, and invited me to join the next demonstration. I agreed, nervous but excited to witness my first protest.

“Save our park, save our animals, save our pride!” This is the campaign slogan that was chanted by more than 70 participants in Uhuru Park, where the protests began, and also the where I started my journey with the demonstrators. Today, their destinations are the Ministry of Environment and Natural Resources and the Ministry of Transportation and Infrastructure, two of the departments that gave the permission for railway project.

Shortly after arriving at the Park, I spoke with a white lady, whose family has been in Kenya for four generations. She stated that “we are not against the SGR (Standard Gauge Railway), we just insist it is re-routed.” After noticing us chatting, her friend, another white lady that lives five minutes away from Nairobi National Park, told me “we should blame both the Kenyan government and Chinese government.” While I was trying to figure out how to respond, two buses of about 30 people each arrived. Demonstrators announced that Maasai people are coming. The protest was picking up steam.

Participants were milling around, busy making big posters with bold slogans, and putting on the T-shirts that said things like “Don’t Rape Our Park.” I remained mostly in the background, observing. I thought about what would happen if they started attacking Chinese involvement, or what if they were too friendly and invited me to join them, arousing the interest of local or foreign medias outlets? Keen to avoid either of these situations, I kept my distance, ensuring I wouldn’t show up in any pictures or live broadcasting. 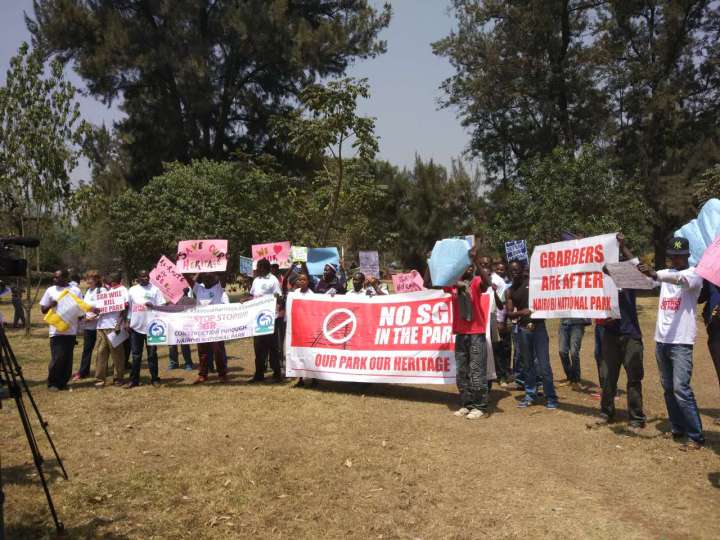 “I’m not joining this demonstration on behalf of my organization, I’m doing it totally independently,” a young Kenyan woman from local wildlife conservation NGO told me, “it’s sensitive because it’s still kind of against Kenyan government.” I heard the same explanation from the other participants.

Hearing this, I was encouraged, and also a bit ashamed—I certainly was not the only one at risk here. As the day went on, I grew emboldened by their courage, and tried to become more involved. I asked John, the person I contacted on Facebook who he thought is to blame for this situation, and he answered, “it is not a Chinese problem, it is our problem.” He became more irate predicting that, “within five years, the park will be finished, and government will be able to take the land as they want.”

At one point, I approached a journalist from a local TV station that was covering the protest. Her opinion was that “CRBC won’t get any negative influence from this issue. If the railway has some quality issues, that may influence their reputation, but this won’t.”

Expecting stronger responses, I was suspicious that I was only getting these types of responses because I am Chinese. However, I also noticed that their slogans, posters, T-shirts and chants didn’t mention China or Chinese involvement at all.

It was almost noon when we arrived at the National Social Security Fund building, where the Ministry of Environment and Natural Resources is located. I took my position on the opposite side of the road to observe. First, demonstrators sang some traditional songs and performed dances. This drew the attention of passersby, many of who stopped to watch. Some just wanted to figure out what was going on and quickly left, while others seemed to care about the cause and stayed for longer.

About half an hour later, demonstrators suddenly became quiet, gathering close to the door. I crossed the road, trying to get a closer look. The door was still closed, but demonstrators were talking with someone inside through a small gap in the door. Five minutes later, the crowd dissipated. Confused, I asked a demonstrator what had happened, and he told me that the Ministry of Environment and Natural Resources had accepted their petition, and agreed to look at it.

Victorious, protestors marched onwards towards the Ministry of Transportation and Infrastructure. Once we arrived, we set up outside and waited. The sun was unforgiving, beating down on the crowd. Still, everyone held their ground.

As nearly an hour rolled by, one white woman complained that “they should at least come out to talk to us!” Finally, people gathered around the gate again. I watched eagerly, then people started to disperse—but this time, not with the same flush of victory. The same white woman came back tired and indignantly told me that the Ministry spokesperson had simply come out to say they were locking to doors, and informing all staff to keep away from the windows.

Somewhat defeated, people started to make their way back to Uhuru Park. However, one protestor announced “this is just a start, we will have a bigger one next week!” Her declaration was met by cheers from the exhausted crowd.

On our way back, a woman wearing a traditional Massai necklace noticed me, and asked abruptly, “Who are you?” Thinking that perhaps she thought I was from CRBC or the Chinese government, I explained that I was simply a student doing research about Chinese image in Kenyan wildlife conservation.

She snorted, and demanded, “Where is your embassy? Maybe we will go there next to protest!”

Li Jinmeng, from Jinan, graduated from City University of Hong Kong with a Master’s degree in International Studies. During her time in Kenya, she visited several wildlife conservation organizations, discussing the difficulty of wildlife conservation in Kenya, and how to involve Chinese people in conservation activities. She also conducted a research project on the Image of Chinese People in Wildlife Conservation in Kenya. Jinmeng was a Summer 2016 China House fellow, and because of her experience in Kenya, she is determined continue to work for wildlife.